Elkins, W. Va., December 18, 2020: Although Elkins Municipal Court is following modified procedures to reduce the risk of spreading the COVID-19 virus, defendants must still appear in court on or before the date indicated on their citations. Persons who have established payment plans for fines and fees must also make their payments as agreed.

“Unfortunately, we have had to suspend a few driver’s licenses recently because of failure to appear,” says Michelle Metheny, the municipal court clerk. “We hate to suspend anyone’s license, but that’s the penalty in state code for missing a court date.”

The court also cannot accept concerns about the COVID-19 virus as an excuse for late payments, according to Metheny.

“We understand people are trying to reduce their face-to-face interactions because of the pandemic, but we accept payments online, by mail, and in the drop-box behind city hall,” she says. “No one needs to come inside city hall to drop off payments if they don’t want to. In fact, I would encourage everybody to use one of these remote options if possible, just to be on the safe side.”

Remote options are also available for persons needing to reach the court to request a hearing or submit pleas.

“I’m available by phone, mail, and email to help with hearing requests and pleas or just to answer any questions people might have,” says Metheny. “If you get my voice mail, please leave a message and I will get back to you no later than the next business day.”

Elkins, W. Va., December 16, 2020: In Elkins, when someone disagrees with a zoning decision, their first recourse is to request review by the Elkins Board of Zoning Appeals (BZA). The BZA has the authority, within certain limitations, to reverse zoning decisions, authorize exceptions, and grant variances. There are currently two vacancies on the city’s five-seat BZA, and applications are now being accepted for these crucial volunteer positions.

The BZA meets infrequently, typically only when an appeal is received. In the last several years, the board has met only a handful of times. However, the Elkins Planning Commission has been working on an updated zoning code for the city that will be presented for council’s consideration in 2021. With expanded zoning rules, it can be expected that the workload of the BZA may expand as well.

BZA members serve three-year terms. To be eligible to serve on the BZA, applicants must have lived inside Elkins city limits for the three years preceding their appointment date. During their terms of office, BZA members are not allowed to serve on the city’s planning commission or hold any other city elected or appointed office.

No special or technical knowledge is required to serve on the BZA. The board is supported by the building inspector and zoning officer, the city attorney, and other city staff as needed.

After interviews are complete, successful applicants will be ranked by overall score on a list of candidates eligible for entry-level appointment to the department. There are currently two entry-level openings that could be filled from this list.

Applicants currently certified as West Virginia law enforcement officers are eligible for a $7,500 signing bonus, although they would join EPD as entry-level officers regardless of current rank. END_OF_DOCUMENT_TOKEN_TO_BE_REPLACED

City Hall Flag at Half Mast for General Chuck Yeager

The U.S. flag at Elkins City Hall is at half mast in honor of Brigadier General Chuck Yeager, who died Monday at the age of 97.

General Yeager was born in Myra, West Virginia in 1923. In the course of an Air Force career that spanned from 1941 to 1975 and saw him rise through the ranks from private, he served with distinction as a fighter pilot during World War II and was the first pilot to break the sound barrier, in 1947.

Elkins, W. Va., December 9, 2020: In response to high coronavirus infection rates in Randolph County and statewide, as well as Governor Jim Justice’s recommendation on Monday that West Virginians 65 and older should self-isolate for the next several weeks, Elkins Mayor Van Broughton has ordered a return to virtual council and committee meetings for at least the month of December. END_OF_DOCUMENT_TOKEN_TO_BE_REPLACED

Elkins, W. Va., December 5, 2020: The U.S. flag at Elkins City Hall will remain at half-mast until after the funeral service for Cassie Johnson, the Charleston Police Department officer who was shot and killed in the line of duty last Tuesday. Her funeral has not yet been scheduled. END_OF_DOCUMENT_TOKEN_TO_BE_REPLACED 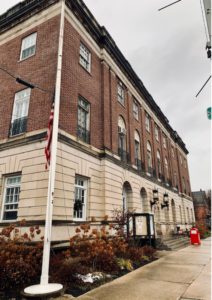 The U.S. flag at Elkins City Hall will remain at half-mast until after the funeral service for Officer Cassie Johnson, the Charleston Police Department officer who was killed in the line of duty earlier this week. Her funeral has not yet been scheduled.

Officer Johnson was shot Tuesday afternoon while responding to a call concerning a parking complaint on Charleston’s West Side. She was taken off life support and pronounced dead on Thursday. The first female CPD officer to be sworn in by a female Charleston mayor, Johnson joined the force in January of 2019.

An online fundraiser for Officer Johnson’s family has been organized by the Charleston Citizen Police Academy Alumni Organization.

According to the Officer Down Memorial Page, 269 law enforcement officers have died in the line of duty so far in 2020.

The 2021 city election is fast approaching–and City of Elkins needs your help.

On March 2, 2021, voters will elect a new mayor and a council member from each of the city’s five wards. Voters will also decide ballot questions that could significantly alter the structure of this city’s government for generations to come.

But none of this can happen without the hard work and dedication of poll workers. The success of each Elkins election rests in the hands of about two dozen people willing to serve in this vital role. END_OF_DOCUMENT_TOKEN_TO_BE_REPLACED

Elkins, W. Va., November 28, 2020: At 9 a.m. on Thursday, the mayor’s ad hoc Committee on Boards and Commissions continues its consideration of proposed appointments and reappointments to the city’s various boards and commissions. Anyone interested in filling one of these crucial, volunteer positions should inquire as to vacancies with the city clerk at (304) 636-1414, ext. 1211. END_OF_DOCUMENT_TOKEN_TO_BE_REPLACED

Water is off in vicinity of South Railroad Ave. & 10th. St. due to water main break. Repairs underway.