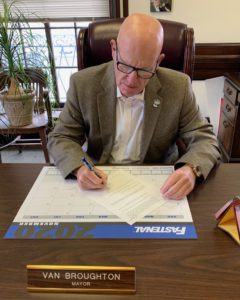 Elkins Mayor Van Broughton signs Ordinance 276, which makes changes to the city charter for the first time since 1901.

Elkins, W. Va., November 27, 2020: Last week, Elkins Common Council approved an ordinance making changes to the city’s charter. A city charter is the establishing document of a municipality and lays out the structure, authority, and basic operating rules of the city government.

The changes made last week, which council approved 9-1 and become effective April 1, are the first since the adoption of the current charter in 1901.

Some changes proposed in the draft charter could not be adopted via ordinance because of qualified objections entered by both city residents and several council members that remained unresolved by the time of council’s final vote approving this ordinance. Council voted 6-4 to place several objected-to sections before voters on the ballot of the March 2021 election.

One objected-to change, which would have implemented at-large election of council members, was discarded. The sections that council voted to place on the ballot would adopt what state code calls the Manager-Mayor plan of city government; affirm the city’s commitment to complying with state open-government laws; and extend the Elkins mayor’s term of office to four years.

Pending the outcome of the March 2021 election, for now Elkins retains a Mayor-Council plan of government and Elkins mayors continue to serve two-year terms. Regardless of whether voters approve the ballot item extending the mayor’s term to four years, the winner of next March’s mayoral contest will be elected to a two-year term.

The action approving the un-objected-to charter changes marked the end of council’s progress through the process for adopting charter changes via ordinance prescribed in W.Va. Code § 8-4-8. These steps included a 30-day period of public review and comment and a public hearing, followed by the first reading of this ordinance, on November 9.

The city’s current charter was adopted in 1901, when Elkins absorbed the town of South Elkins. In its 2018-2023 Strategic Plan, the Elkins council set itself the goals of reviewing and updating the charter and evaluating the feasibility of adopting a manager-based form of government. Starting in 2019, council retained and met multiple times with an attorney specializing in municipal law and charter changes to learn about opportunities for further improving and strengthening the Elkins City Charter.

Learn more about the charter-change process in Elkins here.

Our yard-waste and glass drop-off site has reopened.